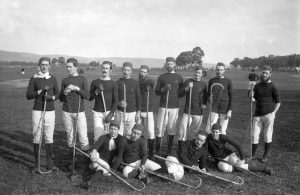 The beginnings of lacrosse in South Australia can be traced back to 1883 when a meeting was held at the Prince Alfred Hotel on the 6 April, and the Adelaide Lacrosse Club was formed. While 35 members signed up, and permission was sought to use the South Park Lands in what is now Pityarilla / Park 19, nothing further eventuated for this club. However, two years later, a new Adelaide Lacrosse Club was formed, with the first practice held a few days later in the South Park Lands. Soon a lacrosse club was formed in Noarlunga, and on 1 August 1885, the first lacrosse match in South Australia was played between these two clubs at Noarlunga, resulting in a 1‒1 draw.  A return match was played three weeks later at the Adelaide Oval, and this time Adelaide defeated Noarlunga by 1 goal to nil.

In 1887, two new clubs were formed — North Adelaide, and Knightsbridge, leading to the formation of the South Australian Lacrosse Association in 1888.

Women’s lacrosse can be traced back to 1915, when an article from The Critic on 23 June mentions the forwarding of a dozen youth sticks to the Jamestown Ladies Lacrosse Team. In 1930, an article in The Register News-Pictorial tells how Miss Louise Hardy had been instructing lacrosse to girls at St Peter’s Collegiate Girls’ School and Girton House (now Pembroke School). However it was not until 1961 that the SA Women’s Lacrosse Association was formed, with a formal four-team women’s competition launched the following year.

Box lacrosse was first played in Adelaide in 1932. While the first reported “box lacrosse” match was more of a small sided lightning carnival played at the Birkalla grounds, in October that year an indoor box lacrosse game was played as part of the proceedings of a charity ball at the Palais Royal on North Terrace.

Lacrosse has a rich history in South Australia, and over time the historical photographs, documents and records we have will be digitised to safeguard their keeping. If you are in possession of any such photographs or documents, we would be delighted to receive a high resolution scan of them, or if you wish to donate them, they will be gladly accepted.

The Lacrosse SA Historian, Luke Oswald, can be contacted at historian@lacrossesa.com.au

Other sites of interest:

Contact us with your question here or feedback via email.